The Writing Life of: Rhianne Williams

This week on ‘The Writing Life of:‘ I am thrilled to be interviewing author R.S. Williams. Rhianne will be sharing with us detail of her writing life, telling us all about her latest book ‘The Collective’, which was released on 21st April 2017, and answering a few fun questions too.

So without further ado I’ll hand you over to Rhianne 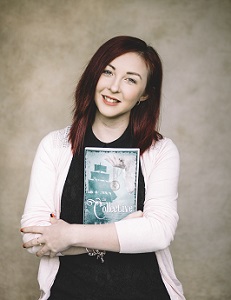 Rhianne Williams, formally known as RS Williams, writes Fantasy, Adventure and Romance novels. As an avid reader Rhianne has always been in love with the written word and the emotions a good story can create.

Discovering she had a knack for creating stories as a teenager, she started work on her first story. However, at 16 the mundane adult world called her back to an admin job and Rhianne put writing on the back burner until she turned 20. Rediscovering her fascination with writing and creating Rhianne then threw herself back into her writing in 2014.

When she isn’t catching plot bunnies, typing up her creations or writing on her blog, you’ll find her in front of the television watching her favourite shows, spending time with her family and getting lost in others fictional worlds.

There were many things I wanted to be as a child. A teacher, an Anthropologist, a professional book reader. I studied Forensics at College and went on to university, but they never fulfilled my heart like writing does.

I couldn’t tell you. All I remember from my childhood is reading. I also remember my brother going to the midnight releases of Harry Potter, and skipping a day of school JUST so I could finish reading Breaking Dawn!

I’ve always had a love for reading stories, I love the emotions a good bit of writing can produce. TV and Movies are also something I am addicted too. It’s always really been there, but I had never considered it until I was about 16, once I started I couldn’t stop. I took a break when I started working, but the writing always called me back.

I just started writing. A friend offered to write a book with me and through Facebook Messenger we created a story, things turned sour with that one so the manuscript is collecting dust in an envelope in case he ever decides to go against my wishes and publish it without my consent. But that’s another story.

While writing that, a university friend who was attempting to write her book at the time, made me realise what I was missing. And so The Collective was born. I had no plan, it just came to be.

As I am in full-time employment my writing process is in bits and pieces. I write in the mornings or evenings depending on my shift.

I have a word count of 200 words a day, per story. I usually get to about 300-700 words done in 30 minutes if I am really focused. On the weekends, I get up before all my friends and boyfriend and write until they’re awake then be social. It’s a slow process but it works around the day job.

At one point, I did. It just wasn’t for me though. If I had it would have been under the name of Estelle Keen.

I don’t think so… What strange habits are authors supposed to have?

It depends on where I am. Drafting usually happen by hand in notebooks, along with outlining and plot creation. If I am at work, out with friends, or not near a computer/missing a pen, I jot down things on a note app on my phone. At home I write the full manuscripts on my laptop and imac. Depends on my mood.

I have written one book, The Collective, and I have two unfinished manuscripts that I am currently working on, along with a few short scenes that have nothing to go with. I also have a manuscript which will never see the light of day because of a friend.

I am a mixture of both. Every book is different, it will be written the way it wants to be written. The Characters lead the way.

I try too, the good ones feed my ego and the bad ones will help me grow as a writer (after I wallow in self-pity for a while). 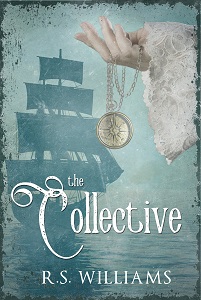 Matilda Gregson never knew a world outside hers existed, that is until Harvey comes along and shows her something beyond her imagination. All that is on Tilly’s mind is finishing her dissertation, getting her degree, and spending time with her friends before the end of the school year.

But everything changes when she meets Jenny, an agent of a secret society, and nothing prepared either of them for the adventure they are about to endure. Under the pressures of surviving, their friendship grows and they find friends in the most unlikely of places, and betrayal just around the corner.

Will they both be able to stop him before he tears Jenny’s society to the ground?

I started writing The Collective for NaNo in 2014. I started two weeks in after I learned about it. I took a six month break after starting a new job because I wasn’t sure on what free time I would have.

I wrote the final words in March 2016 and finished editing March 2017. As I self-published I got my book out the following month.

I had to change the name of my characters, as described in the cover evolution post on my blog. Tilly just came to me, probably after someone mentioned the film Matilda. Her surname was the name of one of my best friends, but I changed this to a random name off my name list after I was asked to changed names.

Jenny was suggested to me by one of my writer friends, and Harvey after Harvey Spectre from Suits.

Tilly is a clumsy girl who loves her family. Jenny wants to make her parents proud, ever since she first found out about their job she’s wanted in.

As I pantsed the entire book there isn’t a scene I could pick out.

It was the name of the society that Jenny is part of, it had been running around in my head for a while before I actually decided to stick with it.

I had my book professional developmentally edited, then I had three of my friends edit it, along with myself. Finally my boyfriend was the final reader before I hit publish.

I self-published on Amazon Kindle and through Createspace.

Celebrated to myself and annoyed my boyfriend.

The Collective Book Two and Book One in a completely new series, a fantasy trilogy. I also have notes for other books lying around.

Pasta and Pizza. I could eat it all day every day…

Oh gosh. There are so many. Pirates of the Caribbean, Moulin Rouge, The Mummy, National Treasure, Harry Potter. I’ll stop now.

Depends on my mood at the time.

My House, paying off the mortgage would free up lots of monies monthly. The probably my own personal editor for all of my future books. Haha.

You can find out more about R.S. Williams by visiting the website/social media sites below.

Prize is one sign paperback copy of ‘The Collective’. UK Only – Sorry.

I would like to say a big thank you to Rhianne for sharing with us details of her writing life, and for a wonderful interview. 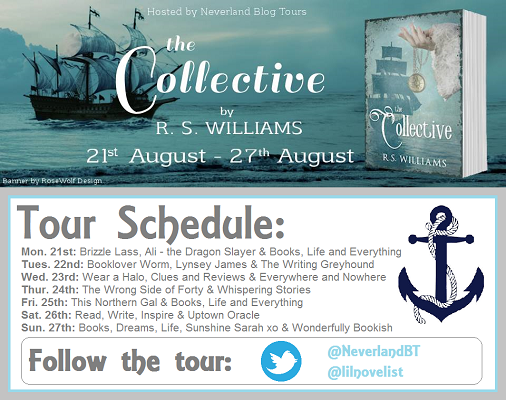