You Only Live Once by Jess Vallance – Book Review

You Only Live Once by Jess Vallance – Book Review 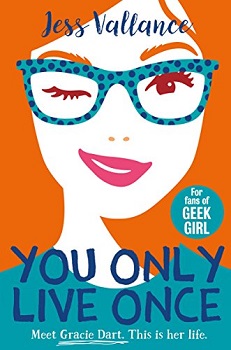 You Only Live Once
Gracie Dart Series Book One

Gracie Dart has always worked hard and she’s got a wall covered with revision timetables and French verbs to prove it. But now GCSEs are behind her and she suddenly starts to think: what was the POINT of it all?

When Gracie thinks she’s dying of a disgusting tropical illness, she starts to worry she’s been wasting her best years being sensible. It’s like people say: you only live once – so isn’t it about time she started LIVING?

(OK, so the tropical illness turned out to be a fake-tan miscalculation. Anyone could make the same mistake.)

When Gracie decides to do something, she does it properly. Gracie Dart is about to live out her dreams. However embarrassing.

Sixteen-year-old Grace Dart is a bit of a hypochondriac, she also likes to be in control of every aspect of her life always needing to know what is happening next. She is one of life’s planners.

That is until Grace is stuck in that time zone between sitting her GCSEs and awaiting her results. The wait is excruciating for her and after a near death experience (Okay not quite so near death), Grace makes a realisation, ‘You Only Live Once’.

With this now firmly set in her mind, she decides to have some fun and live a little and what better way than making a bucket list. Grace sets off into the path of self-discovery and learns some important lessons, including information both good and bad about herself.

I might not be quite the right age for this book having just turned forty-one but I can still remember that agonising wait for my GCSE results, as well as I have been through it will me eldest son and will be going through it with my middle son next year. From slightly older that Grace I too had that moment of self-discovery and went off the rails probably more than Grace did.

It’s also quite amusing that my mantra in life has been since that period in time ‘You only live once’, so this book really struck a chord with me and took me back to a place I thought I had left far behind. However, it’s true that with age comes wisdom. Unfortunately, Grace although a lovely, sweet girl doesn’t really have any wisdom and sets out on a course not only to have fun but also to push her friends and family away and yet she never notices, just like many teens don’t until too late.

The book is highly amusing, very witty, and has some real laugh-out-loud moments, especially when it comes to her little brother Paddy and his teddy Giraffe with an apt name!!

This book covers everything from sexuality, friendship, relationships to life in general. Ms. Vallance has done a very good job at getting the life of a teenager just right. The only part I didn’t like in the book was Grace’s relationship with Spider and Vicky, but I think this is more to do with me being a parent and could see how damaging the relationship was and how controlling and vile Vicky really was. This is a credit to Ms. Vallance as it shows how involved I got with her amazing plot.

I grew up in Bournemouth but moved along the coast to Brighton to go to Sussex University. I decided to do a law degree as I didn’t have any particular calling and thought at least it would be a route to a nice secure job. The only problem was, the law degree was quite boring. Some bits were good – crime, family, forensics – but most of it was more about covenants and trusts and equity and easements. I can’t even remember what all those words mean now.

When I finished my degree, I decided I’d only train as a solicitor if I couldn’t find something else within a year and applied for every job I could find. Luckily, I was eventually offered a not-too-bad one – as a scriptwriter for an educational media company.

I still write some educational stuff on a freelance basis but now write books too.

I’ve lived near Brighton since moving here for university, although I did live in Paris for a year which was fun.