Before the Dawn by Georgia Rose – Book Review

Before the Dawn by Georgia Rose – Book Review 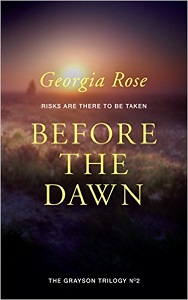 I received a free copy of this book/h4>

…he moved closer and slowly ran the point of his blade along my jaw line as he spoke softly, intimately, to me. “So, you are Trent’s woman. Now that is very…appealing.” I glared back at him silently.’

There are testing times ahead for Grayson and Trent as trouble threatens Melton Manor. When an attack is made against those on the estate, Grayson gets caught in the middle finding herself and those around her in terrible danger. Terrified when she thinks tragedy has struck again she fights to protect those she now views as family and, suffering bloodshed and pain, confronts her fears – both brought by the enemy and by the one she loves.

This is the second novel in the Grayson Trilogy by British author Georgia Rose, who has departed somewhat from her previous genre to offer readers a fast-paced, action thriller, based on her original characters. Whilst an element of romance underpins this new tale, it now forms part of the backdrop rather than taking centre stage.

Clearly mindful that some will have read ‘A Single Step’ and other readers are new to her work, Rose drip-feeds a little information from the first book, without dwelling too much on rehashing the original story. This is a difficult balance but I think she achieves her objective and this book stands alone.

‘Before the Dawn’ is written in the first person with the action being seen through the eyes of the main protagonist. Despite a faster tempo, the cast still work well together, although I sensed a subtle change in dynamic between Emma and her main foil.

Rose has again done her homework as she paints a gentle picture of domestic life at Melton Manor but there is a definite feel of underlying menace as the plot unfolds and before long, the characters are literally fighting for their lives.

Rose again makes good use of literary techniques with clear descriptive passages, three dimensional characters, a competent plot structure and a pace that gathers momentum as the story develops, dispersed with a little humour along the way. There was a rather drawn out scene towards the end of the novel which I think could have been covered in a paragraph or two, although Rose may have deliberately used this as a device to contrast with the high-powered action of earlier chapters.

The cover design didn’t immediately grab my attention but as I got into the novel, it was clear its purpose was to depict an eerie atmosphere of imminent danger and the covert stealth necessary for survival. However, when competing with thousands of other novels, is it eye-catching enough to attract the casual reader?

I believe this book will appeal to those who enjoy straightforward fast-moving action thrillers. Sometimes a sequel can promise much, only to disappoint on delivery but not in this case. Congratulations to Georgia Rose for another engaging novel; she has shown her versatility as an author and has set the bar very high for the final book in the trilogy.

I very much enjoyed this book and the small qualifications mentioned above are insufficient to warrant any deductions. I award ‘Before the Dawn’ a well-deserved five stars.

Georgia also runs her own ‘self-publishing workshop’ at – www.threeshirespublishing.com